This is a great question! As many of you reading this likely know, oral immunotherapy (OIT) is a desensitization process for treatment of peanut and other food allergies. You can think of oral desensitization as what Dread Pirate Roberts (Westley) did with iocane powder- a colorless, odorless, and deadly poison from Australia. 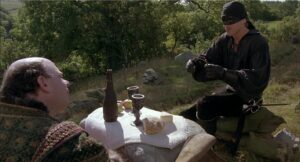 Westley spent two years building up a tolerance to iocaine powder by ingesting increasing amounts of it, so it would not hurt him. He uses this protection to defeat Vizzini in their battle of wits!

Early OIT for peanut has been shown to be ~98% effective for infant to toddler aged kids while only 20-30% of kids otherwise outgrow peanut allergy. A multicenter study published by Jones et al., in Lancet in January 2022 looked at 146 kids 1-4 years-old who either received a maintenance OIT peanut dose equivalent to ~ 8 peanuts daily (96 kids) or placebo (50 kids).

After more than 2 1/2 year of OIT, 68 of the 96 (71%) on OIT could tolerate a challenge equivalent to about 20 peanuts compared to 1 of the patients (2%) on placebo. So, even if kids could not tolerate the ~20 peanut equivalent challenge, they were still able to tolerate ~8 peanut equivalent once daily.

The primary goal of OIT is to reduce the risk of an anaphylactic (life threatening) reaction due to an accidental food exposure, but the odds are excellent there is even greater benefit! Twenty-one percent of kids in the study who had reached a maintenance peanut OIT dose were able to tolerate about 20 peanuts even after discontinuing OIT for over 6 months. They had achieved SUSTAINED UNRESPONSIVENESS (SU) or what can be thought of as REMISSION from their peanut allergy!

The percentage who achieve remission seems to go up significantly when the SU challenge is done after 4 weeks of avoiding the food (usually after a few years of OIT). In a study by Vickery et al., published in The Journal of Allergy & Clinical Immunology in January 2017, the success rate for achieving remission for children 9-36 months of age was over 90% for those who completed the protocol for peanut. Once someone achieves remission by passing a SU challenge, then they should no longer need to have access to epinephrine for that particular food!

Together, these studies show that starting peanut OIT before 4 years of age increases the likelihood of achieving both desensitization AND remission, suggesting a window of opportunity at a young age for treatment of peanut allergy!

That is not to say that older kids cannot be successfully desensitized. In fact, our first patient was desensitized at 9 years of age, and is now nearly 16 years-old and doing very well! We have also had teenagers and adults successfully achieve a maintenance dose of OIT.

While these studies focus on peanut, the same outcomes likely hold true when using OIT to treat other food allergies, such as milk/dairy, eggs, tree nuts, soy, and sesame. Our team is constantly working hard to provide the safest and most effective treatment opportunities for our food allergy patients! If you are interested in learning more about OIT, schedule a visit with one of our providers. You can do so here: https://aafacenters.com/contact/

You can also read more about OIT on our Food Allergy Center page.

We also recommend you read or see the Princess Bride if you haven’t already!